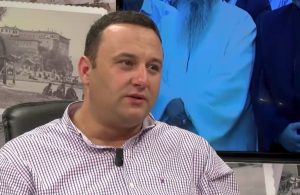 Dr. Olsi Jazexhi: I see the relations of Albania and Macedonia developing very well. Albania and Macedonia share many things together. They are Balkan countries who share their Ottoman and Byzantine past. Many nationalist – Rilindas of Albania were originally from Macedonia. Many statesmen that contributed to the creation of Albania in the 20th century were Macedonians. In the present Edi Rama government we have a number of ministers who are originally from Macedonia, even though they do not admit this in public. The Macedonians of Albania, from the ex-Mufti of Albania – Selim Muça – to the Minister of Diaspora, Pandeli Majko have always been very influential in Albania. We have many university rectors, artists, journalists, state officials etc in Albania who come from ethnic Macedonian families. I personally have many Gollobordas – Macedonian Muslims friends who are aware of their ethnic origin. Albania and Macedonia share so many things. We share similar ethnic groups and moreover we are two countries who have large Orthodhox Christian and Muslim Communities. We share a number of lakes together and our climate, culture, past are very similar. We are like one people who come from a common Ottoman – Socialist past. The presence of the Albanians in Macedonia, makes Albanians very interconnected with Macedonia too. Many Albanians spend their holidays in Oher, Struga and love to visit Skopje and Tetova, and likewise, during the summer thousands of Macedonians frequent the beaches of Albania. The path of Albania and Macedonia towards the European Union, is transforming Albania and Macedonia into two beautiful provinces of the Europe. If the process of the European integration continues as planned, one day Albania and Macedonia will become two European “vilayets” of the Greater European Empire, like they were Ottoman vilayets 120 years before. We will have no borders and will become like one country.

Macedonian newspaper Ilinden: What is your position on the upcoming referendum in the Republic of Macedonia?

Dr. Olsi Jazexhi: The referendum that Macedonia is doing for its name-change is a shameful referendum, which is orchestrated by the American administration, which is very desperate to insert Macedonia into NATO. This process which is hurting the Macedonian national identity, started in Macedonia with the American interference in its internal affairs in 2016. The Obama – Clinton administration which was gearing up for war against Russia – targeted Gruevski as a possible Russofile by bringing Zaev to power. The government of Edi Rama which was at service of CIA’s boss John Brennan paid an illegal role on pushing the Albanian political parties in 2016 to ally themselves with the interests of the American imperialism and influence and interfere in the internal affairs of Macedonia and bring an American puppet – like Zaev into power. The referendum of 30 of September is a continuation of the American project – which wants to totally control Macedonia, like it has managed to take control of Albania since 2014. The referendum of 30 of September aims to insult and subdue Macedonia for a great American war project against Russia. The referendum aims to:

The referendum of 30 September aims to totally subjugate the great history of Macedonia and is treating the Macedonians as a no-nation. In my previous video pronunciation I have urged the Albanians and Macedonians of Macedonia to reject this shameful referendum. To profess their democratic rights and to defend the name and history of their country, and to say no to NATO’s wars and plans. By rejecting the referendum to join NATO, the Macedonians will preserve their European identity and will say no to a military organization which wants only conflicts and war.

Macedonian newspaper Ilinden: What are the relations of Albania with Turkey and Greece?

Dr. Olsi Jazexhi: The relations of Albania with Turkey and Greece are very complex. The Edi Rama government which is dominated by Christians is generally Islamophobic towards Turkey and Islam. The Rama government has jailed and persecuted many Albanian Muslims in these past years, sometimes for very fun reasons. Turkey which is not happy with many things that are happening in Albania has sent many complaints – regarding Albania’s support for an anti-Turkish group that Albania hosts. However, the government of Albania has not satisfied the Turkish requests. But on the field of economy, Albania enjoys good relations with Turkey. Prime Minister Edi Rama and his ministers enjoy excellent relations with Turkish businesses. The creation of Air Albania by the Turkish Airlines is one such example. However, in the schools and universities of Albania, Albanian school curricula attack the Ottoman past of Albania and show the Turks as being obscurantist and not civilized. This phenomena which is the backbone of Albanian nationalism can be found even in Kosovo and Macedonia. The relations of Albania with Greece are also very complex. Prime Minister Edi Rama who describes himself as a reborn Catholic, has attacked in the past years the Greek minority in Albania and even bulldozed the Church of Saint Athanasius in Dhermi. Later, Edi Rama’s government tried to appease the Greeks, however the Greek minority is not happy with what the Rama government and its businessmen have done to their properties in South of the country.

Macedonian newspaper Ilinden: Is the announcement of border correction between Kosovo and Serbia realistic and would there be implications in the Balkans?

Dr. Olsi Jazexhi: The issue of border corrections between Kosovo and Serbia is part of the American administration requirements towards Serbia and Kosovo – to fix their borders and sign a lasting peace. The Americans, after inserting Albania and Montenegro and now Macedonia with Zaev into NATO, plan to have Kosovo and Serbia next. To do this, they first need to force Serbia and Kosovo to recognize each other and to do this they want to create ethnically “clean” countries. They want the remaining Serbs of Kosovo to go into Serbia and the remaining Albanians of Serbia to go into Kosovo. The existence of rival ethnic groups in Kosovo and Serbia will be a source of tension between the two countries in the near future. President Vuçiç of Serbia and Thaçi of Kosovo have been ordered by certain Western politicians and probably the Trump administration, to resolve their border and ethnic issues and recognize each other so that Russia can have no justification for interference in the future in the Balkans. I believe sooner or later the territory exchange between Serbia and Kosovo will happen, and both countries will be asked to join NATO, even though for Serbia this process might take a bit longer. The implication for the Balkans of this NATO expansion will be that we all will be NATO colonies, and the Americans will dominate the foreign policy of our countries, at the same way as the Roman Empire controlled and dominated ancient Macedonia, Dacia, Illyria etc. We will fight for NATO, like ancient Macedonians, Dacian, Illyrians etc fought and were enslaved by Rome. The history is repeating itself in the Balkans, since after the fall of communism.

Macedonian newspaper Ilinden: How are the rights of the Macedonian national minority in the Republic of Albania respected?

Dr. Olsi Jazexhi: Albania has a large number of Macedonians. Some are Muslims and some are Orthodhox Christians. In Gora, Prespa, Golloborda, Tirana, Korca, Pogradec, Librazhd, Dibra Macedonian communities are large. In general the Macedonians have integrated themselves very well in the Albanian society. After the collapse of communism, the Macedonians gained many rights. However, in the media and in public, few Macedonians dare to show their ethnic identity. Because of Albania’s chauvinistic and nationalist past, many are afraid to proclaim their identity. Many Macedonians have been assimilated and have lost their identity and nowadays show themselves to be more Albanians than the Albanians themselves. Albania lacks a multi-cultural culture and tolerance. In many TV studios and newspapers, one can see time and again insults against other minorities. In the schools of Albania, Albanian children are brainwashed and told that the citizens of Albania are all Albanians. They are told that Scanderbeg and Mother Theresa were Albanians – even though they had Macedonian relatives. Sometimes even “Macedonian” university professors who are afraid to think otherwise, accept these Albanian tales. The tales of Albanian nationalism are one of the reasons why many Macedonians and other minorities fear to display their ethnicity of Albania.

Editor-in-Chief, Macedonian Newspaper “Ilinden”: Dr. Olsi Jazexhi,Thank you for the interview, on behalf of I thank you for your cooperation and wish you personal and professional successes.