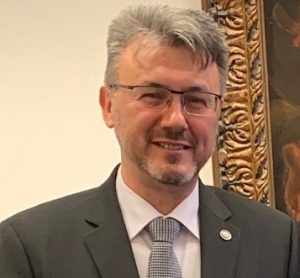 I was born in Greece in 1965. As the child of a family originating from the Turkish community in Western Thrace, I grew up in Germany at an early age when my family emigrated to Germany due to deteriorating political and economic conditions in Western Thrace. I’m married, I have three kids, and I am an architect as a profession. I have been actively involved in civil society activities for nearly thirty years and was elected as the President to the Federation of Western Thrace Turks in Europe (ABTTF) in 1995 and am still currently in that capacity. We met the Federal Union of European Nationalities (FUEN) in the years when we were trying to spread the word regarding discrimination and rights violations against our Turkish community in Western Thrace at the international level. After joining FUEN in 2007, I was elected to the FUEN Presidium for the first time in 2013, for the second time in 2016 and for the third time in 2019. During my time as vice president in charge of international organizations and FUEN member organizations, I pioneered the establishment of the Working Group (TAG) of Turkic minorities and communities at FUEN.

Macedonian newspaper “Ilinden”: It would certainly be very interesting for our readers if you, as the President of the Federation of the Western Thrace Turks in Europe, could describe the history.

As a result of repression and intimidation policies in Greece, which began to have an impact on the Turkish community in Western Thrace in the 1960s and intensified in the 1970s, there has been intense migration from the region. These policies, which Greece implemented against the Turkish community in Western Thrace, were manifested as “melting” and “forced migration”. In this social, political, cultural and economic pressure environment, the majority of Western Thrace Turks who were forced to emigrate from the lands where they were born and raised chose Turkey, while a significant part preferred other European countries, especially Germany. This is how the process of associations of Western Thrace Turks began in Germany. Associations, which were established in cities where Western Thrace Turks had migrated, agreed that an umbrella organisation should be organised to bring an international voice against the Greek government which denies that the Turkish community in Western Thrace is “Turkish”. To this end, ABTTF was founded in Germany on 28 February 1988. Today, with a base of close to 30,000 people and 25 member associations, our Federation, which is the voice of the Western Thrace Turks at the international level, is headquartered in Germany. Since 2010, we have a representative office in Brussels, we are advocating rights and lobbying with the Council of Europe, United Nations, OSCE, European Union, and we have collaborated with non-governmental organizations operating at the international level. We have been actively working for over thirty years.

As a result of the French Revolution, growing ideas of nationalism brought the Balkan Wars, borders were drawn in the Balkans. During the First World War, which erupted following the Balkan Wars, much blood was spilled on the Balkan front. During the interwar period and following the Second World War, Socialist Yugoslavia was founded. The problems, which were frozen for many years during the Cold War, were again ignited in the Balkans with the disintegration of the Soviet Union. There has been great suffering in the blood-soaked Balkans. For 100 years, due to ethnic tensions and conflict in the Balkans, the priority was ensuring peace and stability. Democracy was established too late in this region; new democracies were built towards the 2000s. While democracy had no opportunity to develop, the current problems in the Balkans remained present. The long-standing name issue between Macedonia and my country, Greece, has only been recently resolved. All states in the Balkans are complex in terms of minorities, including the former Yugoslav Republics. One-third of Serbia’s population is composed of non-Serbs. Following their homeland Croatia, Croats live most extensively in Bosnia and Herzegovina. Following the Macedonians, the largest ethnic group in Macedonia are the Albanians and there are also Turks along with other numerous minorities living in the country. In Kosovo, Macedonia and Bosnia and Herzegovina, minorities are considered constituent elements of the state. However, it is impossible to say the same thing as for Albania, Serbia and Croatia. Minorities, especially Turks, do not officially have minority status in Bulgaria. In Greece, Western Thrace Turks are known not as Turks but as a Muslim minority, and as such Macedonians, Vlachs and Chams are not recognized either. In such a multinational geography, many minorities live in each country. As a result, no country in the Balkans trusts each other, and also mistrusts minorities in the country. Therefore, the main problem is lack of trust. Trust must be established both between countries and between the government and minorities in its country. For minorities, it must be the government, the state, which builds trust. For this, there must be an equal level of dialogue. Policies which are imposing and disregarding minorities should not be implemented.

FUEN aims to create EU-level protection and support tools and mechanisms for national and linguistic minorities living in Europe through the European Citizens’ Initiative, titled “Minority Safe Pack”. Thanks to this package, minorities will be supported at the EU level and they will survive, maintain their identity and culture and access programmes and tools in order to stand up against assimilations. A total of 1,215,789 signatures were collected throughout Europe in 2018 at the end of a year-long signing process. This initiative is a significant gain for national and linguistic minorities living in Europe. Furthermore, it is of utmost importance to stress that there are also MEPs who will work for this to be implemented by the EU. As such, our FUEN President Lorant Vincze, who is part of the Democratic Alliance of Hungarians in Romania (which is a member of FUEN) was elected as an MEP in 2019. Now, as FUEN, we will work with all our strength in implementing the provisions we are calling for by the EU’s legislative bodies.

Macedonian newspaper “Ilinden”: In what way do you think that the Macedonian minority in Albania can, through Federal Union of European Nationalities (FUEN), internationalize the issue of law and its weaknesses in order to attract attention from international organizations that cover issues related to minorities and human rights?

FUEN is the largest umbrella organisation that brings together national minorities living in Europe. Its foundation goes back to the year the Council of Europe was founded in 1949. In 2019, it celebrated its 70th anniversary and FUEN is a big family. As the representative of this family, FUEN aims to create a protection mechanism that will encompass all national minorities in Europe. At the same time, it attaches importance to the problems of its member minorities and demonstrates its attitude towards sudden events through press releases and other media outlets. Through projects, it organizes activities to promote stability and dialogue in the Balkans and the Caucasus, allowing all minorities in that region to represent and speak out. The resolutions submitted by members at the congresses send these decisions to the relevant governments and international organisations, transmitting the demands of minorities. Within FUEN, it gives trainings to non-governmental organizations on different subjects with the slogan “Build Yourself!” in order to improve the capacities of minorities. In addition, with respect to the working groups within FUEN, member organizations can have the opportunity to establish closer cooperation with other organizations that are experiencing similar issues. Solidarity is of paramount importance at FUEN. At this point, each minority organization has experience in different fields and is ready to share it with another group that needs it. For example, there are many organizations with lobbying experience, and other organizations that want to benefit from this experience. They will be definitely helped if they make any requests. In this sense, FUEN is a pool of cooperation and solidarity that eliminates geographical boundaries.

Macedonian newspaper “Ilinden”: What is your message to the minorities in Balkan und Europe?

My message to minorities in the Balkans is: ‘It is not enough to be right; it is necessary to fight to take your rights. And this is only possible through unity and solidarity’. As for the minorities in Europe, it is necessary to divide the entire European geography into north and south. Indeed, minorities living in northern Europe have left wars long ago, they have a wide array of minority rights and live in countries which are mature democracies. However, it is impossible to say the same for the south of Europe. As in the Balkans, minority rights are often taboo in these countries. Many have younger democracies than in the north, have more limited rights in terms of minorities, and dialogue mechanisms are either problematic or inexistent. Under these circumstances, at FUEN, minorities which are advanced in terms of rights can pass on their stories, experiences and models they build in their own country to minorities who are not in the same situation. This is a great opportunity for mutual learning to gain experience. FUEN is an important platform to take advantage of this opportunity and I would suggest to them not to hesitate to use this opportunity.

Macedonian newspaper “Ilinden”: Thank you for the interview, on behalf of the Macedonians in Albania. I thank you for your cooperation and I wish you personal and professional successes.