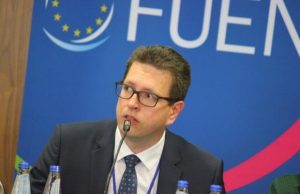 Newspaper “Ilinden”: Mr.Vincze Loránt, please provide a short biography to introduce yourself to or readers.

One of the first things when introducing ourselves within the FUEN is to say our nationality and the country or region we are coming from – as we at FUEN all belong to minorities. So I’ll start with this: I am a Hungarian from Transylvania, Romania. We are one of the biggest minorities in Europe, more than 1,2 million people, around 6,5 percent of Romania’s population. My professional carrier started as a journalist at the Hungarian language program of the public service radio, followed by editorial and management work, all this before moving to Brussels where I have worked with the members of the Hungarian minority of Romania in the European Parliament. In the meantime as the International Secretary of RMDSZ (the organization of Hungarians from Romania), I became more and more involved in the issue of the protection of national minorities in the EU. The Minority SafePack Initiative proposed by my home organization was soon supported and accepted by the FUEN and became one of its coordinators, later I became Vice President of the FUEN. In 2016, I had the great honor and privilege to become president of FUEN, the main umbrella organization of the national minorities in Europe.

Newspaper “Ilinden”: It would certainly be very interesting for our readers if you, as the president of the Federal Union of European Nationalities (FUEN), could describe the history of the FUEN for us in your words.

The history of the FUEN is not a short one, as the organization was founded exactly 68 years ago, on 20 November 1949, in the Palais de Chaillot in Paris, to be more precise. It was the same year that the Council of Europe was established. In the early years this young, all-European organization was dominated by regionalist movements, such as the Flemish, Bretons, South Tyrolians, but it soon became the umbrella organization for the autochthonous, national minorities and ethnic groups in Europe. For a long time FUEN has been an organization with only Western European members. That changed with the historical changes in 1989 the fall of the Iron Curtain. The national minorities in Central and Eastern Europe had the opportunity to establish their own organizations and claimed their rights. In these years, FUEN incorporated many new member organizations and developed into an all-European organization. Today it has 95 members from 35 states. FUEN had a decisive influence on the legal documents of the Council of Europe that are currently in force, the Framework Convention on the Protection of National Minorities and the European Charter for Regional or Minority Languages. We have consultative status at the Council of Europe, the OSCE and the UN and we work closely with the EU, especially, the Parliament.

Newspaper “Ilinden”: Mr. President, what are the main problems minorities facing in the different European countries?

The minorities of Europe face different problems and challenges. Most of the minorities of Western and Northern Europe are in a good situation where the state considers them equal citizens and offers them equal rights with the majority or in other cases in this space the legal framework on minority rights is frozen. Meanwhile many states in Eastern Europe fail to offer even the most basic rights for them. Greece or Bulgaria does not even recognize some of its minorities (strangely enough this also applies for France), and then there are the stateless people who are not even given citizenship in the countries where they live. The rights provided differs much from one country to the other, even respecting the existing legislation is a challenge in many countries. Let us face it, in the region there are many newly created states with young and fragile democracies. Introducing new norms and change the mentality of the majority takes time and many investments from both sides. So, it would be hard to say that all the minorities of Europe are confronted with the same problems. But this doesn`t mean that we have no common goals: we all want to be equal, we all want protection for our language and culture, we all want guarantees that nobody can take away our rights. We want to feel at home in our countries. Unfortunately, history and everyday experiences have both shown us that not all European states are up for this task. This is why we at FUEN think that the European Union should share competencies with the Member States regarding minority issues. Our European citizen`s initiative, Minority SafePack aims to achieve this.

Newspaper “Ilinden”: Will Federal Union of European Nationalities (FUEN) and membership organizations involved reach the one million signatures needed for the Minority SafePack Initiative “You are not Alone”- one million signatures for diversity in Europe? And can you tell us something about the achievements reached and the work in progress to reach the aims of the initiative.

The signature campaign for the Minority SafePack Initiative is at full power now. Most of our member originations from all over Europe are working hard to obtain the signatures needed. And not only that: some member states of Europe – Germany and Hungary being the most important – are our supporters, and in these countries we can also count on signatures from them majority. Our Europe-wide online campaign is also set to begin. We are very confident that by April we will be able to gather the one million signatures needed.

The FUEN has constant preoccupation about the situation of minorities in Greece and Bulgaria. Especially regarding Greece, where we have several member organizations, with many active also in Europe, the FUEN has regular position papers, resolutions, field visits, conferences, including in Athens. Greece is still refusing to recognize the ethnic minorities, instead of taking positive measures it fights all initiatives aiming the minority recognition, including the FUEN. Nevertheless, we will continue to have interventions for the Western Thrace Turks Macedonians Pomaks, Vlachs in Greece. In Bulgaria, the situation is different; we have only one member organization, the Aromanian, while the biggest ethnic minority in the country are the Turks. We have a policy in the FUEN: we act for the minority groups on the demand expressed by their member organizations. It is easy to say why: the representative of the minorities know what is best for their own people, how could their problems be solved, how should the authorities be accessed. We definitely don’t want to do more harm than good for the minorities. If the proposals of our members is in lien with our general policies, we raise those topics on international and European level, but also directly with the state or regional authorities. From Bulgaria we had little such demands so far, I recall the only topic was the right to use the mother tongue in the election campaign and we had a supportive statement on it and also lobby work in the European Parliament.

Newspaper “Ilinden”: In what way do you think that the Macedonian minority in Albania can, through Federal Union of European Nationalities (FUEN), internationalize the issue of law and its weaknesses in order to attract attention from international organizations that cover issues related to minorities and human rights?

The main frame to find good solutions in minority protection are the member states. Sometimes the refusal for dialogue and positive measures of the authorities is so strong that internal solution is not possible. In this case internationalizing internal issues can be an instrument to influence the national authorities, but finally the solutions need to be adopted by the national or regional authorities, though the international pressure can have a role in doing that. Albania is a young democracy, democratic institutions have not much case law, and the rule of law has still flaws, it would be good for the state to look for best practices in Europe to find the right solutions. That will always be Albanian solution of course, but based on working solutions from abroad. The FUEN will always be happy to take the aims of the Macedonian minority from Albania on its agenda. It should be clear, what the aims of the Macedonian community are, where would they need support.

Newspaper “Ilinden”: Can experts or professors close to Federal Union of European Nationalities (FUEN) adequately assist in the effective realization of the linguistic, educational and political rights of the Macedonian minority in Albania, using domestic legislation and international treaties scrutinized by the Albanian parliament.

The FUEN represents the interests of the minorities and has an extended lobby capacity in the European institutions; it also has a number of partner institutions that can provide further expertize. The solution however can be provided only in Albania, so the challenge would be to convince the Albanian government and Parliament to adopt a legislative framework for minorities, including rights to use the mother tongue, education in minority language, ensure the political representation of the minorities in all decisions regarding them. The FUEN can help and assist Ilinden throughout this process.

Newspaper “Ilinden”:Mr.Vincze Loránt, what is your message to the minorities in Europe?

I have the same wish for all minorities in Europe: be yourselves, be proud of your linguistic and cultural heritage. Never give up the fight for what is right, what is European, seek for recognition, rights and equal chances to use your language and culture as the majority population does. Use your status in the societies as member of minority communities like an opportunity, since you speak more languages, you have your own culture and you have easy access to the culture of your home country. You all have an immense potential to build bridges between the different cultures. Use this advantage in your favor! You may count on the European solidarity, fifty million Europeans are in the same situation as you, and they speak a minority language in their home country. We help each other, and we look for each other. I wish all the best to the Macedonians in Albania.